Welcome to the official site of the Hungarian Bhutan Friendship Society that provides information about the Kingdom of Bhutan and our Society’s programs. Our association was launched in September 2011 and registered at the court in May 2012. The Society’s goal is to encourage and promote knowledge and understanding of Bhutan in Hungary and create bridges between the two countries. We kindly welcome everyone to our public events and among our members. Currently, we count more than 160 members, including our honorary members: Dr. Karma Phuntsho, Ms. Dawa Dem and Mr. Arun Bhattarai from Bhutan.  

Below you can read about our public events organised to date and several national and international events where our leadership represented our Society:

24 November 2018: AWAKENING IN MY DREAM IN BHUTAN Zoltan Valcsicsak’s talk about Bhutan at the Happiness Day at KMO Cultural Centre, Budapest, Hungary.

29 November 2017: Ambassador Pema Choden opened the First Exhibition on Bhutan in Budapest that was open for the public over three months.

7-9 November 2017: Zoltan Valcsicsak’s talk about Buddhist Economics at the International GNH in  Business Conference in Thimphu.

19-21 May 2017: Co-organization of the international Contemplative Sciences and Management Conference at Corvinus University of Budapest, Hungary.

7 May 2017: AWAKENING IN MY DREAM IN BHUTAN Zoltan Valcsicsak’s talk about Bhutan at House of Cultures, Budapest, Hungary.

23-29 March 2017: Organising a site visit of the business delegation of ProfiKomp Ltd. to Bhutan to explore cooperation opportunities  in the field of organic waste management.

13 March 2017: “Bhutan: The Land of GNH in Transition from Feudalism to 21. Century Modernity”

14 December 2016: AWAKENING IN MY DREAM IN BHUTAN Zoltan Valcsicsak’s talk about Bhutan at the Hungarian Geography Society’s event, University of Szekszárd, Hungary.

Zoltan Valcsicsak’s talk about Bhutan and its economy at the Advaita School of Practical Philosophy, Albertirsa, Hungary.

Our President was a keynote speaker at the Opening Session. Title: Inspired by Bhutan and GNH

AWAKENING IN MY DREAM IN BHUTAN: Zoltan Valcsicsak’s talk about Bhutan in Budakalász, Hungary.

Valcsicsak Zoltan was invited to give a talk about GNH and Bhutan in the University of Csíkszereda in Transylvania, Romania.

AWAKENING IN MY DREAM IN BHUTAN: Valcsicsak Zoltan gave a talk about the roles and positions of men in Bhutanese society, Budapest.

Tour of Hungarian traditional archers in Bhutan organized in partnership with BIGSA. Three matches held: Paro, Thimphu and Punakha. On 19 April, a public event was held in Budapest to share the tour’s experiences.

Zoltan Valcsicsak was keynote speaker at the international conference of the German-Bhutan Society (Deutsche Bhutan Himalaya Gesellschaft e.V.) celebrating its 30th anniversary in Bonn. Tilte of the talk: The Role of Civil Society and Small Businesses in Bhutan: Past – Present – Future

AWAKENING IN MY DREAM IN BHUTAN: Zoltan Valcsicsak gave a talk about roles, rights and position of women in Bhutan, Budapest.

Celebrating Losar in Budapest: talk of members who visited Bhutan in 2015 and food tasting.

Our president was invited to speak about Buddhist Entrepreneurship at the International GNH Conference  in Paro.

Launching the book ‘Awakening in My Dream in Bhutan.  Journeys in the Land of Thunder Dragon and Gross National Happiness’ written by Zoltan Valcsicsak (published in Hungarian) More: www.bhutankony.hu

Among other European Bhutan Societies, our president was invited to attend the meeting and reception with PM Tshering Tobgay  in Brussels. 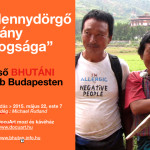 ‘Following the great success of the first Bhutanese film festival held in Budapest in 2013, we screen a series of Bhutan-related films at DocuArt Cinema and Cafe from May to October. The unique cine club was launched in the presence of Michael Rutland and 50 attendees, and each time we invite special guests to talk. 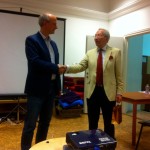 Mr. Rutland is the president of the Bhutan Society in the UK and former physics teacher of the HM the Fourth King of Bhutan. He was invited to Budapest to talk at our Society’s event, at the office of UNCHR, and to be our special guest to launch the first Bhutanese cine club in Budapest. 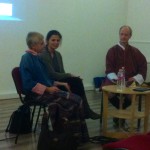 Ms. Pommaret, head of the French Bhutan Society (Amis de Bhoutan) was invited to give three talks in Budapest. First, we celebrated Losar with her incl. Bhutanese food tasting. The next day, she gave a talk on female religious leaders in Bhutan at ELTE University. On Friday, she introduced the audience of the Dharma Gate Buddhist College to Bhutanese Buddhist art  and iconography.

Our last guest of this year was Mr. András Darabant, the Hungarian who spent most of the time in Bhutan, about 5 years in total, working as a forest engineer. András shared his professional experiences as much as his personal stories with the audience who were very active asking a lot of questions. András’ unique photos made the event even more interesting.

2-4 October 2015: ‘Attending the bi-annual meeting of Bhutan Societies in Europe’

Two members of our Society attended the 3-day meeting in the Netherlands which included a public lecture on GNH by the former Prime Minister of Bhutan.

9 October 2014: ‘We visited Bhutan as ethnobiologists.’

Two young biologists, our members, Ms. Anna Varga and Mr. Viktor Ulicsni visited Bhutan in June to attend the 14th Congress of the International Society of Ethnobiology. At this public event in Budapest, they shared their photos and experiences with about 50 people and answered questions from the audience.

Our Society was invited to attend the program of HM the Queen Mother during which agreements with two Hungarian universities – Szent István and Semmelweis –  were signed to provide scholarship to Bhutanese students to study in Hungary. 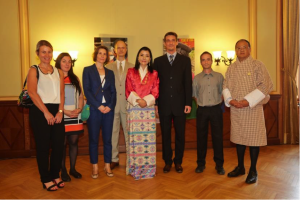 1 July 2014: ‘How to build up a new, value-based economy?Values, alternatives, experiments.’

Roundtable discussion with Mr. György Jaksity, economist and financial expert, former head of the Hungarian Stock Exchange and Mr. Gabor Pozsonyi, deputy general manager of MagNet Hungarian Community Bank on how to transform the current economic and financial system within the near future so that it creates more real social and environmental value for more people. During the discussion that involved the audience we learnt about ethical banking and a few examples of Gross National Happiness in Bhutan.

With our wonderful Bhutanese guests, Mr. Jigme Tenzin and Mr. Yonten Dorji coming from Vienna where they currently do their studies, we got together again to celebrate Losar and taste excellent Bhutanese food. We also watched the short film of Arun Bhattarai titled ‘Losar’ telling the story of a small village boy celebrating Losar in a traditional way.

Our President gave a talk on Bhutan and GNH to UN employees at the UN House in Brussels.

We invited Mr. György Jaksity, economist, former president of the Hungarian Stock Exchange and Mr. Gergely Hidas, indologist to share their personal experiences when visiting Bhutan and their views on what they saw in the country. The well-attended public event provided a great opportunity for the audience to raise their questions and the guests, together with the host, Zoltan Valcsicsak, also showcased their most interesting photographs taken in Bhutan.

September 2013: First official visit of representatives of the Hungarian Confederation of Employers and Industrialists to Bhutan

Attended by 75 people, this public event aimed to make the audience better understand the history and present of Buddhism in Bhutan, its everyday role in society and its relation to Tibet. Our guest speakers were Ms. Mónika Szegedi, tibetologist and Mr. Miklós Kiskovács, secretary of the Diamond Way Buddhist Center in Hungary.

Our president, Zoltan Valcsicsak, was invited to talk about Bhutan at Balassi Hungarian Cultural Institute in Brussels, Belgium.

We organized the world’s first Bhutanese film festival outside of Bhutan with 20 movies being screened in three cinema halls for a total of 350 people. Please read details on www.bhutanfilm.org Held in collaboration with Motion Picture Association of Bhutan, Loden Foundation, Agra Cultural Travel Agency, Cafe de Paris and Budapest Film.

10 February 2013: ‘Get together again to celebrate Losar, the Bhutanese New Year’

With our wonderful Bhutanese guests, Ms. Pema Choki Dorji from Vienna and Arun Bhattarai, young filmmaker, we got together again to celebrate Losar. After short introduction of Mr. Zoltan Valcsicsak, president of the Society, Mr. Zoltán Csörgő from The Dharma Gate Budapest Buddhist University talked about the great Shabdrung Ngawang Namgyal who unified Bhutan in the 17. century. Then we listened to Pema Choki’s personal encounter of Losar celebration in her family. To finish the evening in good mood, we tasted excellent Bhutanese food.

24-25 November 2012: ‘Buddhist Values in Business and its Potential for Europe’

This exciting event focused on Bhutan’s nature and its protection with two speakers from Hungary, Bálint Tremmel and Zoltán Valcsicsák, and two guest speakers from Bhutan, Dorji Rabten and Singye Wangmo, forest engineers. The talks and discussion were followed by the documentary short movie ’86 centimeters’. Held in collaboration with ELTE University, Human Ecology Masters Course. 8 June 2012: ‘Gross National Happiness in Bhutan and Japan’ Two speakers, Zoltán Bassa, secretary of the Japan Society and Gábor Kovács, secretary of the Bhutan Society talked about Buddhist Economics and measuring Gross National Happiness in Bhutan and Japan. The talks were followed by an open discussion with the audience of 60 people moderated by Zoltán Valcsicsák, president of the Society. Held in collaboration with the Hungarian-Japan Friendship Society.

Zoltán Csörgő from The Dharma Gate Budapest Buddhist University introduced the audience of 75 people to Bhutan’s history and Zoltán Valcsicsák, president of the Society, talked about his volunteer experience and travel in Bhutan. Our special guests from Bhutan, Dorji Rabten and Singye Wangmo, introduced the country’s food culture and the event terminated with authentic food tasting.

November 2011: ‘Meeting with Their Majesties the King and Queen of Bhutan’

Our newly launched organisation’s president was invited to meet Their Majesties the King and Queen of Bhutan in London. HM the Fifth King kindly wished good luck and success to our Society.

15 September 2011: ‘The Journeys of the Thunder Dragon: Bhutan’s transition from a medieval country to a postmodern happiness state’

The inaugural event of the Hungarian Bhutan Friendship Society took place at ELTE University, Faculty of Humanities in Budapest with around 200 people attended. Our honorable guest speaker was Dr Karma Phuntsho, cultural expert and Buddhist scholar from the University of Cambridge. Dr Karma talked about Bhutan, its history, distinctive culture and the country’s unique approach to social and economic development based on Gross National Happiness (GNH) as well as Bhutan’s exciting transition from a medieval country to a postmodern state. His talk was very timely given that the UN General Assembly has recently adopted a non-binding resolution that aims to make happiness a “development indicator” – based on Bhutan’s proposal and with the support of 66 countries, including the UK. At the end of his talk, he presented a Bhutanese thangka portraying the four animal friends and delivered his best wishes for the new friendship society. Held in collaboration with the Hungarian-Indian Friendship Society.